A downloadable game for Windows

Hello! Thanks for taking a look at my submission for the Ludum Dare 38 game jam, my first ever jam I've taken place in!

The theme for this jam is "A Small World" and so I decided to make my game one where you have to fend off drills from destroying your little world, a task which gets harder over each of the 14 levels. This game will take a total of 9:20 if you manage to complete it (which I highly doubt as it does get very difficult).

I wont say this is a good game, I wouldn't even say that this game is good for a 3-day jam, but I hope that it's acceptable. Thank you for playing my game.

You are too harsh on yourself. This is a great little game. Very nice twist on the idea. I'd love to see some more work on it, you've got some good talent. Keep it up.

Thanks a ton! I'll probably begin reworking Drill Destruction once I finish learning unity (which Is what I'm currently doing). It's nice to be getting good feedback!

Drill Destruction is surprisingly simple and entertaining. I put more time into it than I'd like to admit. If you're still willing to work on improving this game there are a few suggestions I'd like to put out there if you like. There are just things that I think would help improve it a little bit, as there are some parts of the game that I found pretty damn frustrating (listed in no particular order).

Enough suggestions, now I wanna say what I liked about it, to help boost your self esteem. You said it was shit about twenty times so I think getting a few vibes that you might not actually be very proud with your work.

Yeah that's pretty much it. Good job on the game, great idea, hope you do well in Ludum Dare. Sorry for the long read, too, probably got more words on this than my Cambridge. Is that bad?

- Paintap, patniaP (yeah I'm putting my usernames at the end like an idiot, what're you gonna do about it?)

Nice! I might end up refining this game in the near future.

I could likley do 2-6 without too much effort, although I don't know how I'd do number one for now (though I'm sure it wouldn't take too long to learn either). 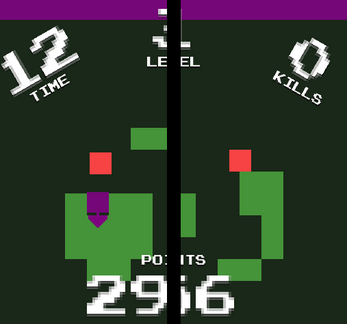